The Future Of Missions

No, not morality (or dentistry.) When we address orality we’re dealing with issues related to communicating with the three quarters of the world’s population who don’t depend on literacy. Most humans throughout history, including about three-quarters of those alive today, have never learned to read. You and I are rare and that has important implications for everything from democracy to missions.

Unfortunately, most of what has been done in missions for the past 150 years is designed by literates for literate, abstract thinkers but doesn’t communicate to the vast majority who are oral communicators. Dozens of ministries are beginning to use local storytelling traditions as a way to reach over 5,500 people groups who have never heard about Jesus Christ in their own language. God is guiding the Church to better understand the complexities of discipleship among oral communicators. Memorized scripture duplicates itself as stories pass from one person to another. Non-print media like radio and podcasting can play an important role.

We use terms like illiterate, non-literate, functionally illiterate which say that oral people are lacking something but if you ask many illiterate people if they feel handicapped they will tell you no. They live their lives very nicely without books, thank you. They grow food, make clothes, trade in the market and raise families with no thought about learning to decipher markings on a piece of paper (or a glowing screen for that matter.)

We literates forget that most of the world doesn’t use abstract logic the way we do. We categorize and define while people in oral cultures use stories, proverbs, and song to remember what the culture deems important. When a literate missionary tries to preach the same sermon in Bangladesh that he used in Boston there are serious problems. Oral people could care less what the word love means in the original Greek or Hebrew. They couldn’t tell you what the “definition” of the word love is in their own language. To them words only have meaning in context. Definition is a literate’s game. 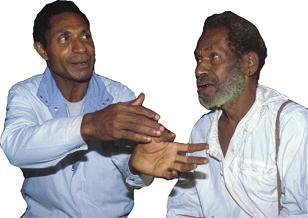 When you want to communicate “God loves you” to oral communicators, you must tell stories about God showing love. The Bible is filled with them but we literates tend to tear the stories apart to “find the meaning”. The clear meaning of Noah and the Flood is that God must punish sin but He still loves man. The suffering of Jesus on the cross demonstrates God’s love. We need to restore the glory and honor to well told intact stories in ministry or we may never be able to reach billions of Hindu, Muslim and animist (spirit worshiping) people with an effective Gospel presentation.

Telling a story well is what makes the film JESUS so powerful. People see who Jesus was, what he did and how he died for them. Every eight seconds, someone indicates a decision to follow Christ after seeing the film. Since 2006 a lot of work has gone into creating cost-effective ways to produce the film in increasingly smaller language groups with no written language. The JESUS Film has also begun making discipleship films to follow up their flagship evangelism tool because the Great Commission is about discipleship. Missions researchers have found several major church planting movements on the verge of collapse because the only follow-up materials for the non-print evangelism strategy were printed books. These efforts are important but still rely on the communication preferences of the message bringer, and don’t necessarily empower message receivers to as easily share with others (unless trained and funded to use Western electronic media.)

Bible translators are wonderful, hard working people but we can’t wait 100 years for every language to have a New Testament. Even if everyone had a complete Bible today, most couldn’t read it. We need to put the Bible into oral story form now so that the people who have historically never heard about Jesus will come to know him in a personal way.

The problem isn’t that people are illiterate, it’s that literates rarely want to adjust to the communication needs of their audience. Jesus himself always used stories with the uneducated fishermen, farmers, etc. that crowded to hear him “teach”. He didn’t pull out a blackboard and use lists or outlines the way theologians today do. He only used abstract theological concepts when he was alone with scribes and teachers (the “literate elite”.) All children start out life as oral learners but in the West, most of us learn to read so quickly that we forgot what depending totally on memory was like. Try going through an entire day without reading anything. You probably can’t make it through lunch without ending the experiment in frustration that you can’t live for a few hours without reading labels, instructions, street signs, etc.

For more helpful information see Orality 101 and Scriptures on Storying.

I also recommend the following sites: